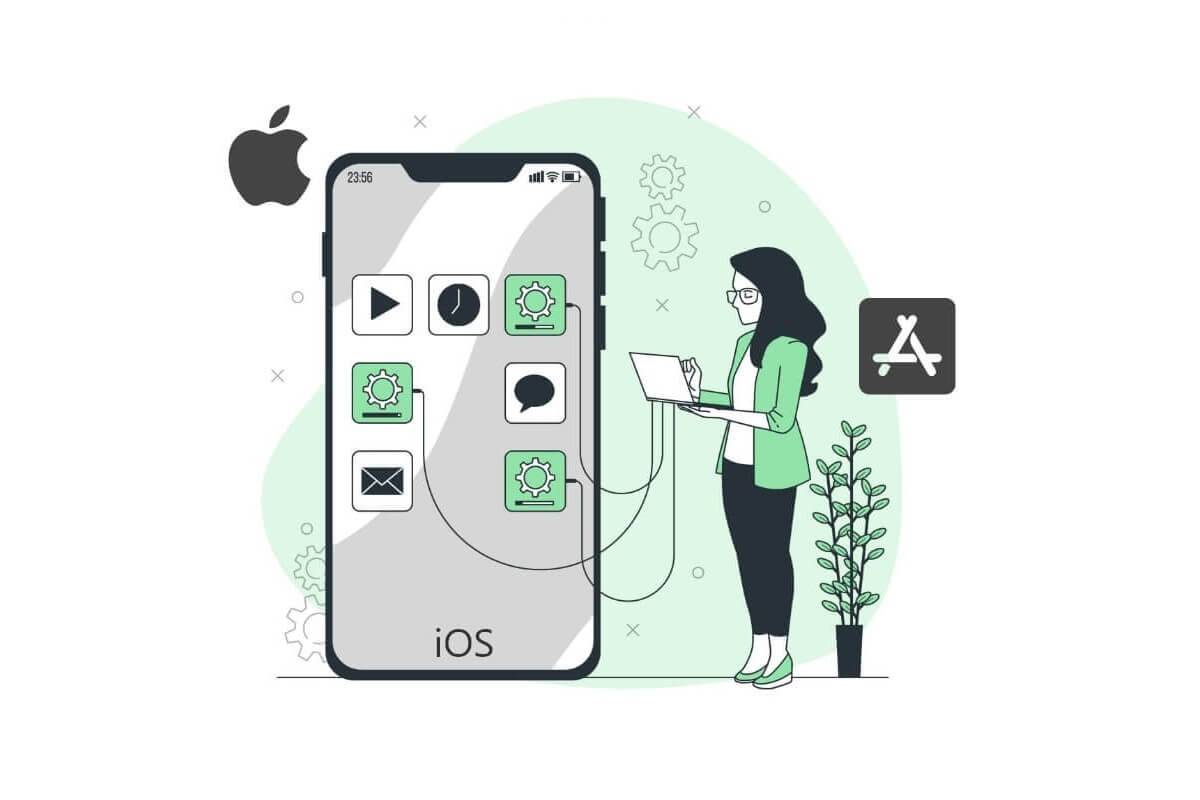 A business app is essential for a developing firm in today’s age of rising technology. Smartphones are the most often used gadgets for both personal and business use. iOS and Android are the two key platforms that development companies use to build custom apps. Both have advantages, but there are several reasons why launching a business app on iOS first may be more advantageous than on Android. Advantages like low app development cost, features, security & reliability make iOS the most preferred choice. In this post, let’s learn more about iOS App Development.

Why Should a Company Select iOS Platform for App Development?

Apple has established a strong brand in consumer electronics due to its superior equipment, outstanding customer service and faultless programming. Every iOS developer ensures that every iOS application runs properly on an iPhone, providing an excellent user experience, which is essential for every business application.

Apple users always appreciate their devices’ regulated surroundings. They also appreciate the simple and engaging UI of iOS apps. These features might make the organisation’s application more appealing to use and enhance revenue.

The iPhone has always been a popular device among tech-savvy consumers. Organisations can upgrade and improve their market segmentation goals by using iPhone apps. If you create an iOS App for your business then it will help your firm to boost brand recognition.

iPhones are quite popular in countries such as the United States and the United Kingdom and having an iOS application allows the firm to expand its business in such countries. Because of the popularity of iPhones in these countries, the company has a good chance of remaining competitive.

When developing a business application, a corporation must select a stage with various exciting qualities, the most significant of which is the highest level of security for its users. iPhone users are safe from outside threats. iOS has a strong defence against external dangers such as viruses and malware, making it more appealing for businesses to select iOS over Android apps.

Using ios app development services to build iOS applications can help a company build reliable customers with increased income and ROI. The scalable iOS apps can cater to investment-worthy clientele while also expanding the reach of the business with greater value.

Project complexity is the most important element influencing the cost of iOS app development. The cost rises in direct proportion to the project’s complexity and the features implemented in the application.

The most noticeable component that has a big impact on the entire cost of iOS app development is the features. Adding more features to your app will increase the cost of its development.

The backend is a server that runs the software and allows the application to communicate with an external data source. While you create an iOS app, you will need backend infrastructure to sync the features with the internet. As an alternative, you can develop your backend by maintaining your server. However, it is more expensive and has fewer possibilities.

When dealing with a large mobile app development company or an expert app development firm, the cost of iOS app development may be higher. Choosing a large corporation may be more expensive because it requires various divisions for different duties while producing an application. Going with an independent developer, on the other hand, may cost you less because there are fewer people involved in the process.

Post-launch app maintenance is another key aspect that influences overall ios app development cost. You should not overlook this critical feature if you want your iOS app to be successful. Regardless of whether your application is complex or basic.

Aside from the aforementioned, a few hidden costs influence the overall cost of iOS app development, including:

Machine Learning (ML) is a fascinating and rapidly developing topic of artificial intelligence. Apple has been enabling the developer community to expand their apps with intelligent features using just a few lines of code in the context of iOS development, all due to Core ML.

AR will close the gap between imagination and reality. For those who are unfamiliar, Apple provides incredibly powerful and feature-rich frameworks, such as ARKit and RealityKit, as well as tools, such as Reality Composer and Reality Converter, which can be used to bring the most innovative and demanding ideas to life in Augmented Reality.

The simple and secure payment method in iOS. Apple Pay is undoubtedly the best way to pay. As a result, whether a company is based in the United States, the United Kingdom or elsewhere in the world, it will be critical for businesses and even developers to ensure that their iOS apps support this service.

HomeKit is at the forefront of IoT innovation in the realm of iOS app development. With HomeKit, a rising number of houses in the United States and around the world are transforming into “smart homes” or “connected homes.” Using HomeKit’s features, households may construct different scenes’ or actions to manage these gadgets by grouping them together and managing them with Siri’s help.

Apple designed Swift, a relatively intuitive programming language. Swift 5.1 is the most recent version that has been officially released. Swift 5.1 simplifies and rewards iOS app development with new features such as module stability and other new features that extend the capabilities of the language and standard library, such as opaque result types, property wrappers, new APIs for String, diffing for appropriate collection types and so on.

Despite accounting for 75% of the smartphone market, iOS consumers are more likely to pay for an app than Android users. Because of Android’s open-source background. The average ios app development cost is $2.01, resulting in a large number of paying customers.

Because of its amazing hardware, excellent customer service and flawless software, the iOS app has become the first choice for a business app. Each iOS app runs smoothly on an iPhone, providing a wonderful user experience and increasing the app’s engagement rate with its customers.

Android apps are not very profitable for a startup because they yield less than 10% of the entire cost of development. Whereas iOS apps can be beneficial for a business by guiding it toward healthier finances through greater revenue and ROI.

Reasons to Choose Custom iOS App Development Services Over Others?

iOS provides customers with a fluid, effortless and perfect user experience that is founded on high-quality hardware and software functionalities. Furthermore, iOS consistently runs smoothly on all devices, which attracts more users. As a result, an excellent iOS app development process can propel your company to new heights of success.

iOS virtually eliminates the possibility of rogue software and keeps security at the forefront of everything. Furthermore, prior to publishing, all apps on the Apple Software Store often go through a lengthy and stringent testing procedure to ensure a fully safe app.

With a limited number of Apple iPhones, iOS provides a much clearer method for this. As a result, determining if your app’s design will fit on the screen should be simple. Furthermore, unique device emulators (for example, Apple iOS Simulator) enable mobile app developers & an iOS development services company to test applications under various iOS versions and hardware configurations.

In comparison to other operating systems, iOS is faster, easier and less expensive to create. iOS apps take 30-40% less time to load than Android apps.

Apple typically provides fresh updates for new iPhones and other iOS devices for at least five to six years after their initial release. All of those iOS devices are receiving the most recent updates at the same time.

The best option is to go with a business that understands how apps in your industry should function and look. They will provide better recommendations and will require less time to construct an app.

In this scenario, cost-effectiveness does not imply the lowest. There are countries with extremely cheap pay rates, however, they do not provide the highest quality.

It is critical to select a provider with which you are completely comfortable. Examine not only your technical requirements but also your abilities and ambitions. Consider the culture of the country in which the company of your choice is based.

Customer reviews are provided on numerous forums and directories that should be used to select an iOS app development company. You should research the client to determine whether or not they are real. When investigating consumer feedback, pay attention not only to the finished product but also to what customers have to say about the iPhone app development process and customer service.

You must carefully choose a company providing offshore custom iOS app development services, that will be providing you with services post-sale.

Top custom iOS app development firms will design and develop iOS apps with a greater emphasis on new and emerging technologies such as ML, AR, VR, IoT and Apple Pay. Businesses will also require professional iOS app developers or custom app development service providers they can rely on to assist them in developing more powerful, scalable and cost-effective applications.

Why is iOS app development so popular?
iOS App Development is in trend because of the below-mentioned reasons:
– Drives more revenue
– Better performance
– High security and secure transaction
– Provides top-quality app
Why is iOS App Development Advantageous for Businesses?
Following are a few advantages of iOS app development:
– The best possible user experience.
– Excellent performance.
– Cheaper and faster development.
– Maximum security.
– Increased Customer Satisfaction.
– Exceptionally creative.
If you want to create an iOS app how much will it Cost?
-The average cost of developing an iOS App is between $30 to $50 per hour depending on the country.
Which Company is the Best for iOS App Development?
– WeblineIndia
– TechGropse
– FATbit Technologies
– WillowTree, Inc.
– Fueled
– Intellectsoft
– ELEKS
What are the Most Recent iOS App Development Technologies?
– SwiftUI
– Xcode 11
– Mac Catalyst
– ARKit3 and RealityKit
– Core ML 3 and Create ML