On Tuesday, Twitter tested Facebook like design. It is on the way to bring out a look that appeals similar to its biggest social media competitor. Previously during last year, the social giant cited that changes are appearing every now and then on its website where tests are conducted with certain user groups.

Now, the fresh design was initially tested on the pages of some people who experienced new change on their page. New design of Twitter majorly puts stress on photo sharing and it is no more like its present, text-oriented, exclusive appeal, to largely like a usual social networking base type of look. This covers a bigger size of profile image appearing on the left side, surrounded by a cover picture accompanied by number of tweets and followers on a layer above it. 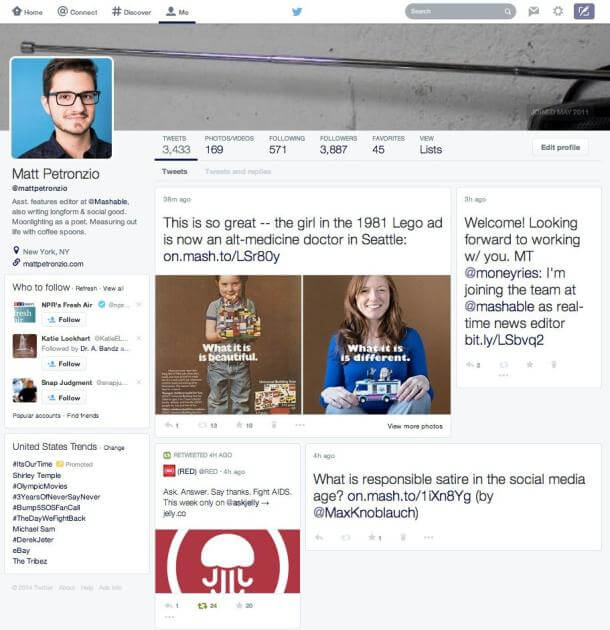 Now the social platform has appearance of the tweets like a collage, with a profile that owns a new fresh timeline. Mostly, the outlook is likely to that of Google+ and Facebook, showing interesting content in separated segments and they are bright and bold for the viewer or the user.

It is still hidden if this new approach will immediately reach all the users of if these inspections will bring no results and disappear from Twitter. But, it is popularly spread that the social giant foresee discontinuing the text-driven enhanced, vertical design for users’ pages. Thus, the new move is not unusual, as it shows the fresh type of approach that Twitter badly wanted to own. The move emerges post Twitter’s initial profit report is declared.

The giant has 241 million active users, a bit more than earlier quarter’s figure of 232 million. Still, on the negative side, stock for Twitter on the news fell down more than 10%.

Dick Costolo, the CEO of Twitter disclosed that number of tweets and likes have gone up by 35% due to changing designs. Also, direct messaging and searching have increased to 25% and 120% as compared to the previous year. He has triple milestones to achieve for his company’s growth which includes enhancing user experiences, particularly in regard to mobile platforms and gadgets. Also, his plans are to simplify the capability to perform personal and open communications on the platform, along with having ease to integrate more videos and photos into the timeline to drive traffic. He ultimately wishes to make Twitter more “visually engaging.”