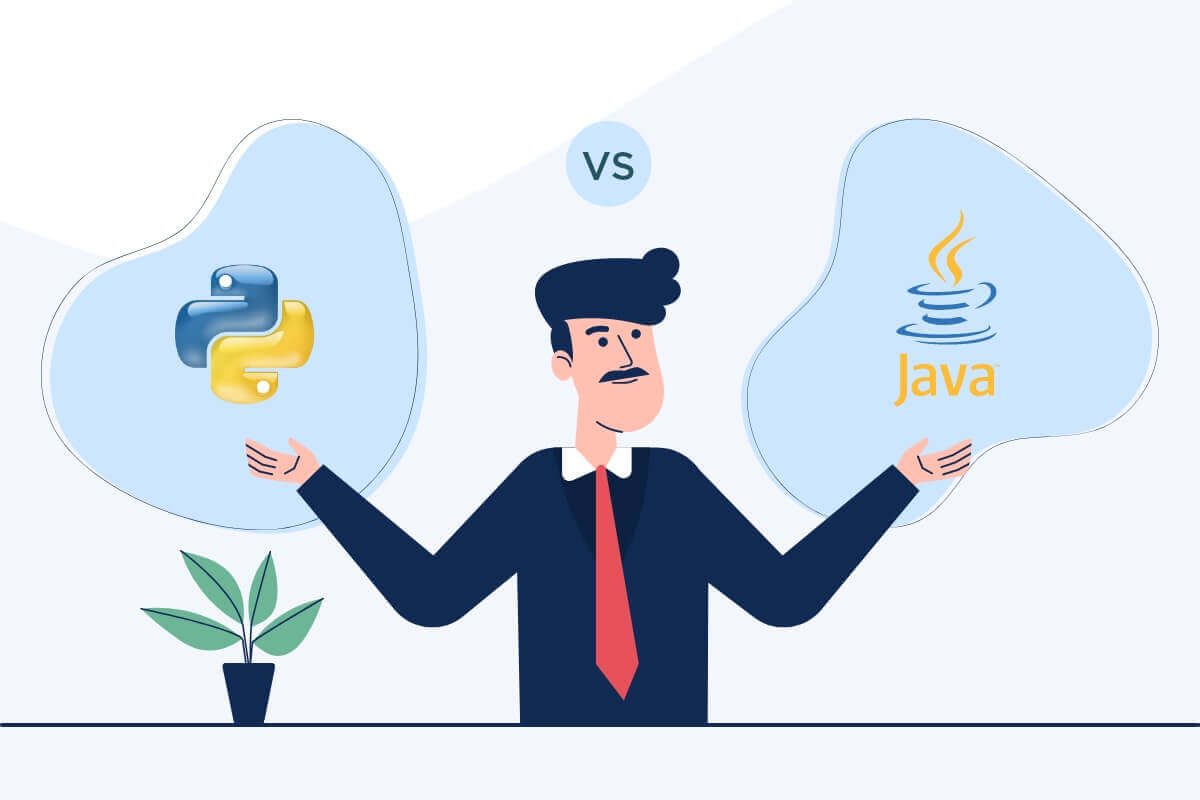 Java & Python are both popular technologies with state-of-the-art capabilities. Therefore it is often difficult to choose between Java vs Python. To make it easy for you, we have compared features, performance, speed, career & applications of Java vs Python.

Java has been around for quite a while. Since 1955, to be precise. It is old and yet has managed to be a popular choice of programming languages to date.

However, trends are changing. Python has rapidly caught the attention of developers and is now more popular than Java in several regions. One of the major reasons for this evolution in trend could be the difference in their typing and compilation.

Yet, the comparison of Java vs Python still leaves some programmers confused, especially those who are just beginning their journey.

To make it simple, let’s start by understanding both the languages separately and then, compare both to identify how they both differ from each other. Is Java or Python better? Let’s find out.

Released and created by Guido van Rossum in the year 1991, Python is a dynamic, high-level, open-source programming language that supports both object-oriented programming and procedural-oriented programming. Python was designed with the aim to make it easier to read codes as compared to other languages.

Since Python syntax is nothing different from the English language or human speech, Python has managed to do exactly that. It is easy to read, easy to understand, and consequently, easy to learn.

It is the features provided by Python that make it so popular in today’s day and age. A few of them are mentioned below.

Python can be used for:

This programming language was created by James Gosling in the year 1955 and was designed to transform the user’s experience of the web. It was Java that led to the transformation of text-based web pages to now pages with animation and videos.

Java also has its share of libraries that developers can use to find code for a certain purpose.

The list of features that have kept Java at the top all these years includes:

Java can be used for:

This understanding of both programming languages makes one thing clear: the Java vs Python comparison can be tricky. Let’s compare and identify the best one.

This Java Vs Python difference and comparison table will help understand how the two languages are similar yet different.

So, this was the Java vs Python performance comparison. Both of their own share of pros and cons. If this didn’t cut it for you either, perhaps the comparison of Java vs Python salary and career opportunities might.

In the United States, the average salary of a Python engineer/developer is approximately $105,000 per year excluding benefits and bonuses.

The average salary of a Java developer in the United States is $101,000 per year excluding benefits and bonuses. The salary increases with experience, position, and skill.

Is Java or Python better for Web App Development? (Conclusion)

So, now that we have the features, applications, and comparison laid out, let’s find out in between Java vs Python which is best for web development?

The main difference between the two programming languages is in their compilation and typing. While Java is a compiled language, Python is interpreted. Consequently, Python offers plenty of string functions, while Java offers only limited ones.

For those just starting out, Python turns out to be a better direction. It is simple, intuitive, and the syntax is similar to human speech. Java, on the other hand, was specifically designed with an aim to allow developers to write once run anywhere codes.

Towards the end, however, it all boils down to the cost and nature of the software project.

Which is better: Java or Python?
Java is better than Python and ahead in concurrency, performance, and simplicity. Java is a compiled language, whereas Python is interpreted.
Should I Learn Java or Python First?
If you want to learn to program, it is recommended that you should learn Python first because of its simplicity and easy-to-learn syntax. On the contrary, if you are looking forward to pursuing engineering or computer science, learning Java first is recommended.
Can Python Replace Java?
The Python programming language has overtaken Java for the first time in 20 years. Even if Python becomes more popular than Java, the usage of Java will not be diminished.
Which Pays more Java or Python?
When it comes to the salary of a Java and Python developer, it is more or less the same for the two. As per Stack Overflow Survey, on average, Python developers make 120k/year, and it’s the same for Java developers.
Which is Faster: Python or Java?
When it comes to speed, Java beats Python. It is because Java is a compiled language and it takes less time for code execution.
Which is better for AI Java or Python?
AI developers are more fond of Python as compared to Java because of its accessibility, ease of use, and simplicity. Though Java has better performance than Python, the latter requires less code and can compile even if there are bugs. Though, concurrency is handled by Java better than that of Python.