Home » Blog » All About Java Development – Advantages and Disadvantages

All About Java Development – Advantages and Disadvantages

Do you know about Java?

Java is known to be one of the most popular programming languages of our times. It is a general-purpose computer programming language, and it has received popularity for being object oriented, concurrent and class based. The language has been in existence for over 2 decades, but its compelling characteristics and continuous evolution have kept it current. Enum, Generics, Autoboxing and others are some of the few groundbreaking changes that have come about in this platform over time. No wonder; many experts believe that Java is one of the best programming languages ever created.

People, new to the field of software development, tend to be confused about which programming language to specialize in. If one had to go by the popularity of a programming language, Java would certainly be the front-runner. However, Java also outscores other languages in terms of job opportunities for new programmers. That justifies the increasing number of young java programmers who want to learn this language.

Where is Java used?

You will be surprised to note that a lot of the apps you use on your Android phone are written in Java programming language. That tells you a lot about the potential that still waits to be realized. Most popular apps in Google PlayStore are Whatsapp, Facebook, Linkedin, FlipKart.

Another industry where Java finds its heavy use and application is the writing of web apps and E-Commerce apps / websites. With the advancement of E-Commerce, the scope has only broaden. E.g. SAP, NetSuite, Alfresco, Liferay, Youtube, Google, Netflix, Mifox (Banking solution) etc.

There are lots of software tools as well as development tools that are written in Java to make the software development task very easy.

Are you looking for best Java development services in India? Get the top Java Development Service offered by WeblineIndia for creating your dream business website and application at affordable cost.

Now that we have spoken about Java’s popularity, let us also discuss about the reasons that make Java programming popular.

There is an extremely short learning curve with Java as it is easy to write, compile, debug, than other major programming languages like C++, Objective-C, C#. That’s a huge benefit, because this ensures that Java programmers become productive in an extremely short span of time. Aside from that, what also makes Java more appealing is its fluent English-like syntax. This means that it is easy to read the logic.

Here comes another interesting advantage of using Java. This allows you to create modular programs and reusable code keeping the system extensible as well as flexible.

Large numbers of opensource development tools that use Java have made Java an even more powerful option for developers i.e. Eclipse and Netbeans. They are extremely strong platforms and have contributed effectively in making Java what it is today. It makes coding simpler, and provides extremely powerful capabilities for debugging.

The large number of open source libraries and well matured with industrial support have also ensured that Java gets to be used everywhere. Some of these libraries have been contributed by many popular organizations like Apache, Google, Yahoo, Facebook, LinkedIn etc. That makes Java even more popular.

How could we miss on this point? When it comes to development, we are today faced with intense competition. Many small and medium enterprises want their software development and/or web app development done for their businesses, but they don’t really have a big budget for that. With Java being free, it makes it cost effective.

Finally, there is extensive community support that Java has managed to muster. That goes a long way in helping new Java developers learn the art and become productive soon.

Hire Java developers for your business needs from WeblineIndia. We have experts team of Java developers who stand out in offering user-friendly website and application development services for the clients across the globe.

Along with advantages, you will always come across disadvantages of any platform. It is same in case of Java too. 🙂 There are some disadvantages that you will find on the way. Here’s a compilation of some of the drawbacks of using Java:

What you need to note is that these are some of the disadvantages that are found with most programming languages. They are not unique to Java. However, having information of these disadvantages will help you use Java more constructively.

We mentioned earlier that Java is extremely popular in the industry. Therefore, learning Java will make sure that you get associated with one of the most popular programming languages around.

Now that the language is popular, more companies are making use of this programming language. That in turn means that some of the top companies are always looking to hire Java programmers be it in-house or offshore or onshore.

Once you learn Java, you can diversify into the programming world by learning new languages.

We mentioned earlier that the learning curve with Java is short. Hence, you become more productive sooner.

As we noted above, there are a large number of uses that Java is currently put to. Depending upon your likes and preferences, you can specialize in one or more of those industries.

We have already established that Java is the way to go for you. It will be good for you to know that some of the top companies are hiring. If you are looking for a great opportunity around Ahmedabad, India, WeblineIndia can be an option to consider.

In conclusion, Java is turning out to be the language of choice. As a new programmer, it is just the right stepping stone for you. Not only it is easy to learn, it opens up job opportunities for you too. Most clients love to have their software tools and apps written in Java, and you could be the skilled developer that this industry needs. 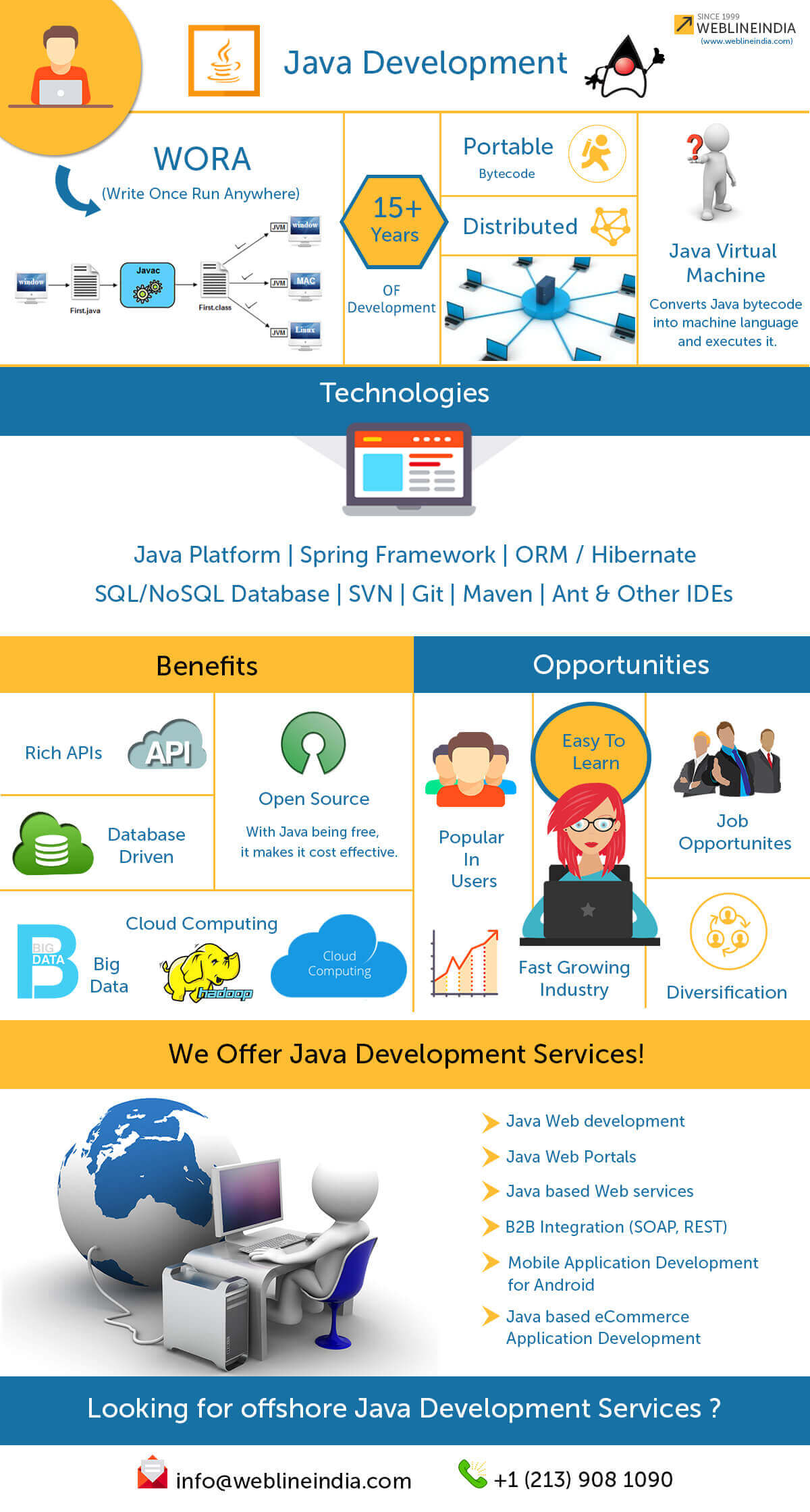