Home » Blog » Why Should You Use Node.js For Web Development?

Why Should You Use Node.js For Web Development? 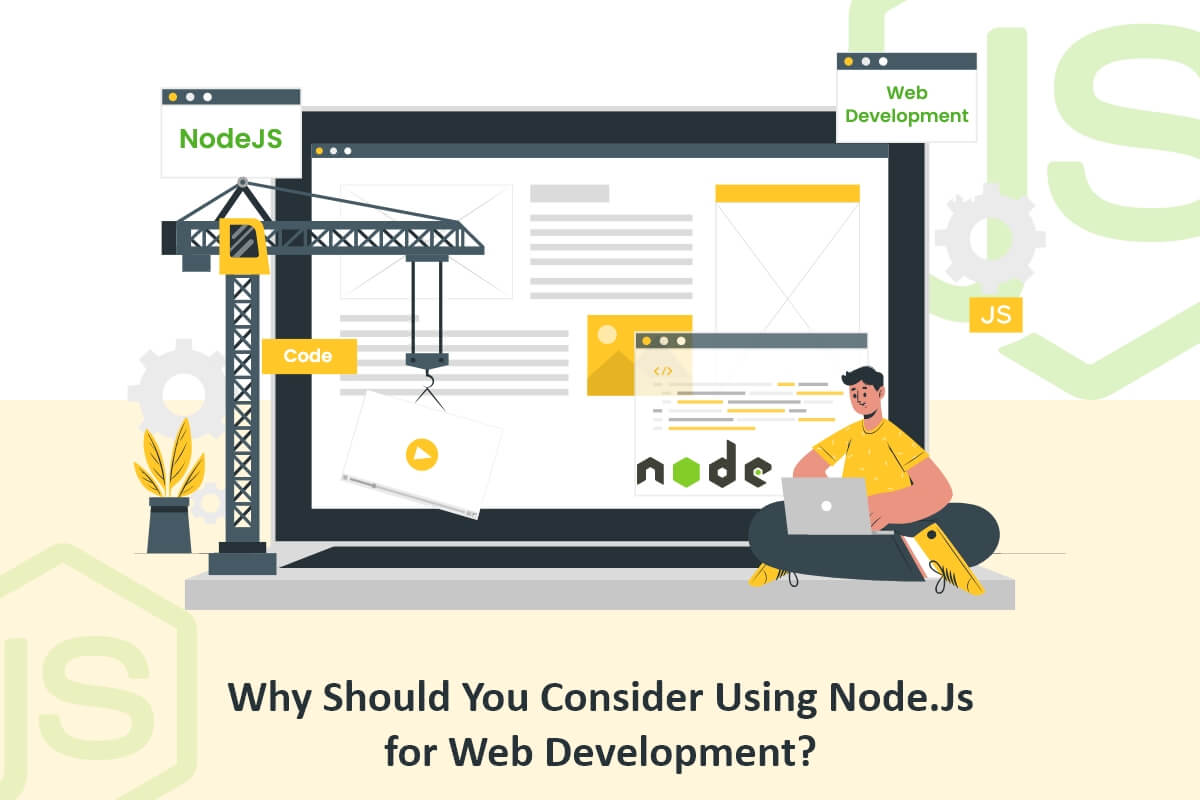 You may not be aware that Node.js has only been around for 12 years. In contrast to the Internet, which is 32 years old, and JavaScript, which is 24 years old, Node.js is a baby. But no other framework has had the same effect on the software development sector as this one has. Ryan Dahl wrote the first Node.js code in 2009. Node.js was once only supported by Mac OS X and Linux. But what prompted Ryan to consider Node.js for web development? The V8 engine is to blame. The V8 engine was developed by the Chrome browser team as its own JavaScript engine. The JavaScript engine can operate more quickly because of this engine’s immediate conversion of raw code into machine code.

Because of the rivalry, the Node.js engine, V8 (also known as Chrome V8 because it is part of the Chromium Project’s open-source JavaScript engine), has substantially improved. Node.js was born at the perfect time and place, but it isn’t the sole reason for its current success. Many new concepts and approaches for server-side JavaScript development were introduced.

When should we use Node.js development?

The following are some notable applications for which Node.js can be used:

Data streaming web apps have grown in popularity as people consume more digital material. You only need a good internet connection to view your favourite movie or series without downloading. You (developers) can process large chunks of data into smaller packages and sequentially use the Node.js web application’s built-in stream module.

Do more with less code; the nature of Node.js allows developers & a Node.js development company to easily construct scalable solutions. Code duplication can occur when many microservices are used. Node.js is favoured for creating microservices frameworks since it is simple to do so. Because it isolates the majority of the underlying or essential system, implementing a microservice with this programming language can be straightforward and efficient.

MQTT, a publish-subscribe communications system, is widely used in Internet of Things applications. In this protocol, WebSockets are used for transport and encapsulation. MQTT and WebSockets both have extensive support and are straightforward to use with Node.js. Furthermore, because it works efficiently with writing and readable channels and streams, Node.js is the most trusted platform for IoT app development.

It is best for creating a node app for applications that are expected to have high peak loads and scalability. Uber is a well-known example of this. The global taxi network is constantly evolving and expanding; yet, the nature of the taxi industry causes significant demand peaks during holidays. For these issues, it is a good option to build a website with Node.js.

Almost all web applications require a back-end to interface with databases or other external services. You may easily find a library to construct a REST or GraphQL API thanks to the big community. Node.js was formerly recommended exclusively for applications with a small number of CPU-intensive tasks. However, since the release of version 10.5.0, threads have been made available to carry out such sophisticated procedures.

Node.js, like single-page websites, may generate a single-page application (SPA) that looks and feels like a desktop program. Because of its flexibility, Node.js is an excellent choice for building social networking platforms, dynamic websites, and email systems. Furthermore, because of its asynchronous back-end data flow quality, a well-reputed Node.js web development company is the best choice for SPA development.

Node.js employs an event-based, non-blocking I/O architecture and has just one CPU – all of that intense CPU processing would prevent incoming requests from being served. The thread may become stuck as a result of the high-end number crunching.

You can also use Node.js and express.js to create a standard web application on the server. However, if these web applications require a lot of CPU power, Node.js’s responsiveness would suffer. Because Node.js’ Relational DB tool is still in beta, it is advisable to do relational operations in another environment.

You can utilise Node.js app development, but the performance and power that Node.js is known for will be rendered ineffective. As a result, instead of Node.js, it is strongly advised to use other frameworks or environments for constructing simple HTML applications.

Reasons for incorporating Node.js development into your next web project

Node.js is extremely useful for reducing time-to-market. Because it is lightweight, Node.js can significantly reduce application development time while maintaining existing functionality. With Node, you can convert your concept into a real product in no time also the designing cost of a Node.js app is low.

Node.js is designed for scalability. It’s one of the most essential characteristics of Node for startups aiming to grow over time. App-based firms prefer to create lightweight, fast systems with a strong real-time reaction that can be scaled up later and expanded by adding more modules or structures to current ones. For more assistance, you may contact a Node.js app development company.

Node.js is also a universal programming language that can be used for both front-end and back-end development. This fundamental capability makes a client’s life easier, as recruiting a team of skilled full-stack developers might be difficult.

Many active Node.js enthusiasts and software developers from Microsoft, SAP, IBM, and others constantly contribute to the ever-evolving and nurturing Node.js community to assist other developers.

The Node package ecosystem, which includes NPM (a node package management), is the largest and fastest-growing software registry on the planet. It has a large number of libraries and reusable templates that you may use in your code to offer more value with fewer resources and time. In the NPM ecosystem, there is a module for almost anything a software developer can think of.

Also, read the blog on Top Reasons to use Node.js for Project Development

The main reason behind Node.js’s richness and simplicity is the node package manager (NPM). Did you know that NPM is the world’s largest software registry? It includes around 1.3 million code packages. What’s more, it’s absolutely free to use. This means that developers have a large pool of packages to choose from when creating high-quality scalable applications. As previously stated, Node.js can easily handle several requests at the same time. It takes less time and money to handle traffic for your application than it does for competitors’ software stacks.

Businesses wishing to construct scalable and resilient web apps should look for a top-rated Node.js application development company with a deep understanding of the technology.

Node.js is without a doubt the best open-source runtime environment accessible. Even though it is simple and widely used, the environment can only be useful and efficient for businesses if used correctly and with the assistance of an expert.